As a child growing up in the Isle of Thanet, Kent (not an actual Isle) my exposure to the pub was mostly a relatively humdrum experience, usually for a family occasion, or maybe a meal, even a new year’s eve visit. The odd trip up to my Dad’s local to watch him play for his Pool team, was about as exciting as pubs got for me during my early teens. Even as I got slightly older, and started paying for my own drinks the venues were quite run of the mill – we would go wherever would serve us, given that we were 16 or 17 at the time. Even during my student years in Leeds, the pubs were still just wallpaper in a occasionally visited room of my life, and the beer was of even less significance. Gradually, as I became more interested in beer and pubs, this changed. As did the places I visited – on visits back to Margate the difference was clearer, less good beer was available there and I could count the number of places worth visiting on one finger.

As a native turned occasional visitor, there’s no doubt I was missing somewhere that would have been a cut above the rest, but generally Thanet’s pubs were either owned by the local family operator or a national PubCo and were much the same. Friday and Saturday nights were busy everywhere, of course, but it was generally the same places and faces. Nowadays, this is far from the case. Having just spent a week in Margate and it’s wider locale I’ve been to less than a third of the places I would usually have liked to visit. Whilst the micropub revolution is still alive and kicking, there’s plenty of ‘regular’ sized pubs and bars that are worth visiting as well. 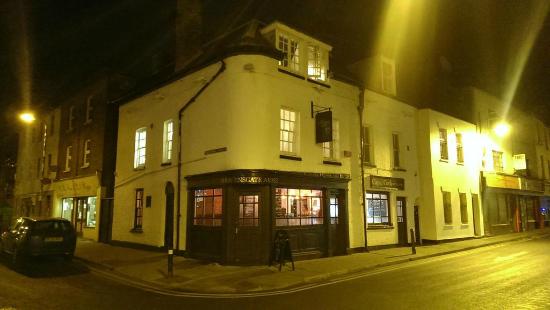 Originally resurrected in 2014 by the now defunct Late Knights Brewery, the Ravensgate Arms was forcibly shut when it had its licence revoked last year due to allegations of opening after hours and breaches of the licence conditions, a decision that mystified many. The consensus opinion seemed to be that the management had been enjoying themselves a bit too much, and the authorities took a dim view of a few incidents by throwing the book at them. Luckily, Eddie Gadd, of the Ramsgate Brewery, joined forces with the original manager of the pub from 2014, to take over, reopening late last year. The pub not only has a great range of keg and cask beer, but a lively atmosphere and that ‘proper pub’ feel. If you’re into visiting a place with that ‘backstreet boozer’ feel, Gadd’s beers and guests can also be found at the Montefiore Arms, a short stroll away.

Now nestled away on an industrial estate, Eddie Gadd and his team have been operating The Ramsgate Brewery since 2002 when they operated on an old Firkin brewpub kit down in Ramsgate Harbour. Whilst the brewery may mainly have a reputation for making excellent traditional ales using Kentish hops, they also produce bretted pales, tripels, sour beers and much more besides. Tours are operated on Saturdays, and there’s an on-site shop offering packaged and draught beer to take away. Ramsgate Brewery alumni are spread far and wide across the UK these days, and Gadd’s have been influential in the current new wave of breweries, even if Eddie himself regards some of the surrounding culture with healthy cynicism.

Despite the name, the Bottleshop in Margate is primarily a bar – the owners being the Bottleshop importers/wholesalers, originating from Canterbury but now with their main sites in East London and Bermondsey. As they themselves have discussed, the decision to open a bar here was a bold one – but which seems to have paid off. Certainly, other than the Ravensgate there isn’t as good a beer selection elsewhere in Thanet, and their position, straddling Margate Old Town and the Seafront is a prime location for tourists and locals. Modern, sleek, but welcoming, this is a must-visit.

From the modern to the old, of sorts, The Old Cottage Pub has been undergoing a long, painstaking process of redevelopment and is scheduled to open this year. The building dates back from 1650 and the owners have taken every possible step to restore the building’s features, as well as install an on-site microbrewery. Their facebook page has been sporadically updated, including a 18 month period of silence, but I am assured that progress is being made. If you’re at a loose end, you can see their appearance on Homes Under the Hammer here. If historical pubs interest you it’s worth checking out the Northern Belle, a short walk from here, which has been operating since 1680. Also of significance is the UK’s largest branch of Wetherspoons at the Royal Victoria Pavilion in Ramsgate, a Grade II listed building – grand, opulent, and sympathetically restored. Ultimately it is still a ‘spoons though.

Much has been written about the relatively short history of Micropubs, and with Kent being the epicentre of the explosion its unsurprising to learn that Thanet is chock full of them. Amongst the crowd, there are a few that are particularly noteworthy – The Yard of Ale was a CAMRA national pub of the year finalist in 2015, and is based in the yard of a Funeral Directors’, The Fez is located on Margate high street and is eccentrically furnished with all sorts of tat and treasures, and The Four Candles in St Peter’s bills itself as the smallest brewpub in Britain – producing its own bottles and casks in the basement. It might disappoint the micropub purists, but The Tap Room in Cliftonville and the Lifeboat in Margate Old Town also now sell Keg. The horror!

My feelings towards the Isle have and haven’t changed, in terms of liveability its infinitely preferable now than when I was younger but its hard to tell if my ageing has been the main factor, or if the diversification of the area into a more lively, if still edgy place is more appealing. Certainly, it wasn’t an outwardly appealing place in my youth, but with the influx of new blood parts of it are markedly attractive – but thankfully still not in a shiny, polished way. There’s still a huge disparity between the inhabitants, with some very deprived communities and resentment of the DFLs (down from London) from the older, more backwards-focused residents, but ultimately the injection of culture and life over the last five or so years is vital and welcomed, especially for those looking for good beer