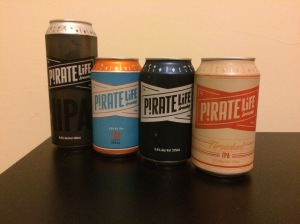 David at Bier Huis in Ossett, near Wakefield stocks a wide range of great beer, mostly from the UK but with decent picks from Europe and the USA, and when I pop in I often find something I havent seen or heard of before.

Upon my last visit I was intrigued to see a selection of beers from Pirate Life Brewing. Australian beer is a rare thing to see in the U.K outside of the usual macro suspects, and so I picked up one each of the cans on offer for an evening’s entertainment.

The Throwback Session IPA was the first to be popped, and it poured as expected – light, golden and clear. There was a crisp, underwhelming aroma but with a sweet lemony hint. Befitting it’s name the finish was quite like a light session bitter rather than a pale, but the flavours were easy going and fruity, and the Simcoe shone through in a lightly savoury aftertaste. A thoroughly smashable easy drinker, and not quite what I expected from an Aussie brewery (I know, prejudiced stereotyping here) – I could imagine this being drunk by the pint from a  cellar cool cask.

The Pale also took my tastebuds by surprise. The aluminium cracked, the contents unleashed a big foamy whoosh into my glass, and there was a musky, piney, peppery aromatic flood. There wasnt much fruit on the nose, but lots of syrupy pineapple, and sticky malt on the tongue. Bitter and fresh, it certainly didn’t taste like it had been affected by the beer miles from Adelaide to West Yorkshite. Strongly resinous and sweet, I’d describe the Pale as Torpedo-esque, oily and thick. One to try and try again.

Following the Pale I had great expectations for the IPA. A slightly hazy amber in the glass, this is more of a typically west coast IPA, with Centennial to the fore on the aroma. On the tongue I got sherbet orange and lime, a lot less bitter than the pale, but still sweetly citric. More so than the pale, there was a now commonplace savoury aftertaste where I’d like to find a more pronounced bitterness. Not quite what I want, but I appreciate it for being more than a box ticker, and I’ll be trying this again.

I left the IIPA until the next day, as at 8.8% and 500ml, I didn’t think I would be giving it a fair trial after the other three. Similar to the Pale in colour, perhaps a shade or two darker, it was dialled up to eleven on the dank and juicy scale. There’s lots of passion fruit and mango, but with the pungent bitterness to cut through. An Double IPA that pays as much attention to the use of malt as the hops, this is thick and full but a different kind of prospect to the current run juice-like IPAs. Although I didn’t notice it at the time of purchase, due to chatting about beer, this certainly wasn’t cheap but it definitely was memorable, and given the distance travelled, volume of the can and level of quality provided it was justified.

Many times, I’ve gone off plan and bought something exotic or unusual and been disappointed, but Pirate Life have created two good and two great beers that I’m pleased I stuck my cash on the line for.

Based in West Yorkshire, I get to try a huge range of beer from a wide variety of breweries, and now and again it all becomes a bit of a blur. Its great to have such choice on offer, but inevitably I don’t always pick a winner. When I go back home to Thanet i’m used to taking a small stash of my favourites, mainly to share with family, but also because until quite recently there hasn’t been much in the way of dedicated off-trade outlets in the area.

However, in the space of about 18 months, this changed – there’s now two or three decent off-licences in the area to supplement an ever growing number of micropubs, and on a trip to Sandwich in spring I was pleased to come across a range of cans from Time and Tide Brewing. I’d previously been impressed when trying their beers on keg, and thought i’d drop a line to the brewers themselves for a bit of background on the company as well as writing up my thoughts on part of their range.

Paul and Sam, founders and joint brewers were happy to oblige, and gave me a short history of the business. ‘We launched Time & Tide Brewing in November 2013, as a dynamic duo, looking to
brew the sort of beers we couldn’t find locally. Paul and I decided to set up our own brewery whilst talking in our favourite pub, having only met once before – we were so aligned in our passion for beer and flavour it just made sense’. From a serendipitous meeting of minds, Paul and Sam spent the first year cuckoo brewing before building their own 20 barrel brewery in 2015.

Other than with the assistance of an apprentice, Paul and Sam handle all aspects of the business on their own, based not far from Deal and deep within traditional cask beer country. Craft beer by and large isn’t on the lips of most drinkers in the area, and I dont think it would be unfair to say that the perception of Kentish beer in the minds of most craft drinkers is based on Shepherd Neame and not too much else. Until recently there was very little in terms of production for keg in the area, but Time and Tide now solely package their beer in keg and can.

From their first cuckoo brew, Calista IPA,  Time and Tide have rapidly expanded to a 20bbl brewery with new fermenters being added at a fast pace. Even with a current range of 8 different beers, they continue to produce experimental brews on a 100L pilot brewery. Although the majority of their early production was in cask, they decided to move to keg production for a simple reason – ‘for us it was always about the flavour! Our beer is unfined and unfiltered, naturally reconditioned in the keg and can with both vessels omitting both light and oxygen, it means that you get the freshest possible beer’

Paul and Sam explain that ‘local businesses are incredibly important to us and we are incredibly grateful to them for taking a chance on us. In many instances these places didn’t have
the ability to dispense our beers and have allowed us to support them in installing the equipment needed in order to serve our beers on draft’. People often talk about innovation when discussing brewery output, and in terms of Kent, Time and Tide certainly stuck their neck out as one of, if not the only brewery canning beer in the county, even though, as they state, ‘our bottleshop style customers then had a bit of work to do to explain to people why canned beers are awesome!’

Time and Tide’s current range of cans certainly stands out on the shelves, not least their 8% ‘The root of all evil’ beetroot hefeweizen. Inspiration comes both from the local area – ‘Spratwaffler is named after the folk from the north end of Deal, where both of us grew up’ – and from quickly developed ideas – ‘Papa Midnight went from concept to fermenter including artwork, recipe etc in 24 hours’

Understandably, local bars and pubs can be sceptical about stocking Kegged products for the first time when they’ve been told for the last 30 years that cask is best, and that this is what will drive repeat sales. Paul confirmed that by adopting their approach they have met with a few hurdles. ‘I think the biggest is education – helping people to understand what craft beer is and dispel a few prejudices. But when people from the local area start to come on the craft beer journey they are our biggest advocates and educators’. Pubs such as the Berry in Walmer, the London Tavern in Margate, and the Queens Head in Ramsgate are prime examples of pubs that serve great keg as well as excellent cask ale, and Paul is not only pleased that their beer has found it’s way into the hands of eager drinkers, he is also keen to progress and keep pushing on.

‘There are lots of great breweries out there doing their thing, however we don’t aspire to be like any of them really. That’s not to say we are not inspired occasionally by what others are doing, its that have loads of our own ideas and are focused on pulling them through. We are keen to grow in a way that means drinkers get more from us.  So we are always looking at tech, methods and capacity to make sure our offering is always getting better.’

From the cans and keg that I’ve had, there is certainly something about Time and Tide’s beers that stands out – bold recipes, clever use of ingredients and an eagerness to improve and expand on simple beginnings. Hopefully, I’ll be able to see their beers more and more on the bars back home, and further beyond, soon.