Starting up a brewery seems hard. Especially to an outsider, like me, who hasn’t and will probably never try. So kudos from me to anyone who gives it a go, especially when it’s a unique concept such as that of EYES Brewing. EYES have started up the UK’s one and only Wheat-focused brewery, and they also think that it is the first of its kind anywhere in the world since the Second World War. 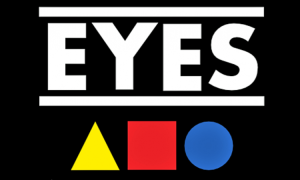 As well as having an original concept for their brewery, Dan, Chris and Tom also have a pretty eventful back story, as explained by Dan. ‘After my little girl was born I stepped away from a career in stand up comedy and back in to teaching.  After going on a day of brewing with Andy and Steve from Learn to Brew, now Crooked Brewing, Tom and I started to get into the theory and make up of beer. As I was building an extension on my house, my wife suggested we build a little bit on the back to put a small brew house in. I paid for the room, Chris and Tom paid for the brewery, and then EYES home brewing was born.’

From banding together over a 100L kit, things progressed when Chris  had the opportunity to become an assistant brewer under master brewer Al (now at Brass Castle) at Ainsty Ales in York, learning how to brew on scale. However, things weren’t running as smoothly for Dan in this period. ‘I was struggling with depression and ended up in hospital. The school I was working for were incredibly supportive until they saw a photo of me at York CAMRA Beer festival’. Disappointingly, the school then changed tack and pressured Dan to quit his job, resulting in a legal battle which ended with him being awarded compensation for his unfair treatment. 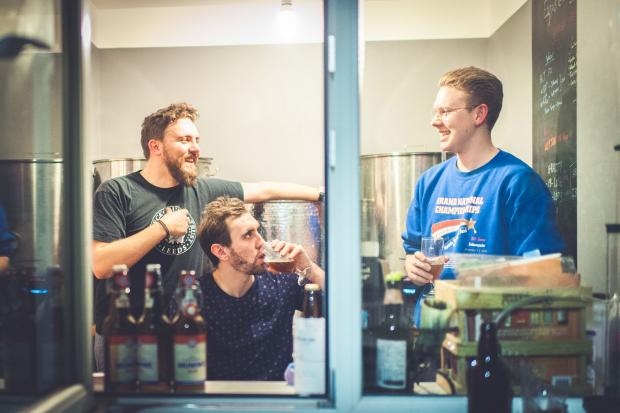 Eventually, alongside a small business loan EYES finally had enough money to buy a van, a fleet of casks and ingredients for the first few brews. In December 2016 they started to sell their first beer, cuckoo brewed at Ainsty Ales, an arrangement which has worked well leading to them brewing at various places in and around Yorkshire. The EYES team is now a quartet of Dan, Chris, Nev and Tom.

EYES are looking to stand out with their range of Wheaty treats, in particular one from the darker end of the scale. ‘Dark Harvest will be a stand out for people as it is one of the world’s first ever Black Hopfenweisses. When we started brewing we started to make German style Hefeweizens as this is what we loved to drink. We then decided to see if we could create more British and American styles of beer but continue to keep over 50% wheat in the grist. Our first ever sale was in Whitelocks which we found incredible, and we will be bringing some exciting cask beer as well as cans’.

The EYES crew are looking forward to attending Festival of Brewers, and are relishing the thought of being a part of a small, independent event. ‘This is like an underground gig for bands to look out for. Leeds has an incredible history when it comes to brewing and this is the future. I think people should get a ticket to see some of the innovation and up and coming stars of this great City of Beer. Though we are pretty much a festival of relative unknowns in the beer world we have a lot of variety amongst us. This is what I am looking forward to. There will be so many different beer styles to get. You won’t get sick of the same beers again and again like you may at other festivals’

About the Festival of Brewers

The first ever Festival of Brewers event takes place on 29th and 30thJune 2018, with New Craven Hall hosting, which can be found just one-mile South of Leeds City Train Station.

All too often, independent beer festivals choose to focus their attention on the same, larger, popular UK craft breweries. This makes it difficult for the hundreds of smaller breweries across the UK to share the spotlight. Festival of Brewers aims to address that by only showcasing the small and independent breweries.

You can find out all the information, including participating breweries and street food vendors, tickets and how to find the venue on the website www.festivalofbrewers.co.uk.

For this month’s collective beer blogging session, Jon at The Brewsite has proposed the topic of Home brewing as a jumping off point for us to explore.

My only experience of home brewing so far was definitely a lesson, possibly even a disaster. My generous other half purchased an all-grain kit from Brooklyn Brewshop for me as a christmas present, following on from a crash course I had taken the year before at Learn to Brew. Whilst I enjoyed learning about the process, my initial excitement was slightly tempered by the investment of time and money it takes to create a decent beer at home, so at least with the kit everything I needed had been provided for me, and with clear instructions. What could possibly go wrong?

Well, nothing, at first at least. I mashed in on the gas burners in a large stockpot. Keeping the mash temperature constant was difficult, but with with a decent food thermometer I managed to keep it within a reasonable range. Transfer proved a much bigger challenge, especially as I didn’t have a spare second pot, but again I muddled through. With the wort hopped, cooled (in ice water in the kitchen sink), and transferred to the carboy, so far so good.

My downfall was in the bottling stage. Whilst my mash had been far less efficient than I wanted it to be (according to the gravity readings) the fermented product looked and smelt good. According to the instructions, I was now to dissolve one cup of honey with one cup of water, and pour the beer in, then siphon from here into the bottles. Judging by the auto-drainpour of my self-emptying bottles two weeks later, with hindsight I wished I had taken more care at this stage….The gush was forceful, not quite ceiling height, but definitely akin to 12 mini-geysers.

So, would I have another crack at it? Yes, mainly because my partner has bought me another kit (she is much more persistent and determined than I), but also because for any beer enthusiast, home brewing seems like something you *have* to try, and by try I mean have a sustained attempt at creating something half decent. It has a certain cache that shows you can grasp beer on a deeper sense, and also, I imagine, gives you a certain sense of satisfaction at having handiwork worth sharing.

Luckily for me, this next kit has a packet of proper priming sugar…

Standard
Long time, no blog! Well, given that most of my January was spent lurgy’d up, the thirst has taken a back seat for most of the year so far. Having missed out on Brewdenell due to poor financial planning on my part, things didn’t get off to a great start, and once the return to work malaise had truly bitten and I’d inhaled a skip full of other people’s germs, even a few bottles at home proved a challenge. A visit to Northern Monk refectory for Hopzine’s Humulus Lupulus tap take over was something I was very much looking forward to, with Rob selecting his choice of the best Beers the UK has to offer. Magic Rock, Kernel and Buxton all made the list, with the only drawback being that in my haste to taste I ended up ‘crafting’ myself into a taxi prematurely…which I think hastened the manflu onset.
The only beyond Leeds expedition was a train journey through the fug to Bradford, where I managed a couple of pints at the relatively recently opened Record Café. Located within walking distance of the establised Sparrow, the focus is not only on a quality, affordable line up of Cask and Keg, but also Charcuterie boards and, of course, Vinyl. If I worked for the Telegraph, I’d probably describe it as a ‘H*pster Paradise’, but of course that would be a poor use of an insipid term to describe what is a welcoming bar with a mixed crowd. Not having a turntable after digitising all my Shakin’ Stevens LPs, I didn’t venture up for a browse through well stocked music section, but a draught selection from Blackjack, Bridestones and Camden ensured I’ll be coming back for a return visit.
Last week, I and many others trotted along to North Bar for a Beavertown Tap takeover, and being a Beer Evangelist (bore) I also brought my Brother-in-Law along for an introduction to Gamma Ray et al. ‘Rare Casks’ said the flyer, which turned out to be a sole Cask of Smog Rocket – not exactly disappointing, but I had hoped for something slightly more exotic. Regardless, it was on form and so were the rest of the selected Keg offerings. I was especially impressed with the Dogfish Head collaboration, Londonerweisse, which was cheek-suckingly sour and lemon sherbet-esque. Appelation, a Bramley Apple Saison with Champagne yeast also impressed, and the Spiced Pumpkin Stingy Jack also made me reconsider my outright indifference to the style. As well as working my way through the tap list, I had a good catch up with other Leeds (and beyond) based twitterers and bloggers, which is partly responsible for making a resumed effort to jab away at the keys now.
March is looking up for drinking opportunites, another tap takeover is planned for North Bar on the 11th March, with Weird Beard the guests this time. I’m also planning a birthday weekend in London, my first in a couple of years, and hope to take in at least one brewery visit and a good bar crawl after. Its also the first Leeds bottleshare evening at Northern Monk on the 26th March, again organised by Rob from Hopzine. All tickets have been sold, but given how quickly they went and the enthusiasm for the event, I can see it becoming a regular fixture already.
Finally, I was lucky enough to participate in one of LearnToBrewUK’s brewing sessions in January, and have just taken delivery of the end product. The day is a crash course in all-grain homebrewing, with all equipment and materials provided. Hosts Steve and Andy run through the process step-by-step in a light hearted and informative way, giving you all the knowledge you need to go home and begin brewing immediately. I paired up for the day with Pete from PlusOne Magazine and we created ‘Clowning Glory’ a light pale, dry hopped with Amarillo. Pete wrote a blog about the day, and Rach (Look at Brew) has also interviewed the guys on her blog. I’d heartily recommend you book your spot on one of their upcoming days, as not only is it a great introduction to Homebrewing, but you get 20 bottles of your Brew a few weeks later. Mine is young, but tasting good and I’ve been told our effort has also been sent to the guys at Beer O’Clock show as part of their upcoming podcast featuring Homebrewed beer, released 13th March.
Hopefully, I’ll be inspired to update this blog more often in the coming months, and hopefully give you an insight into the Leeds beer scene and what’s coming up. The city is now, in my opinion, one of the premier destinations for a weekend away and I would urge you to get yourself on a train this spring/summer.
Standard